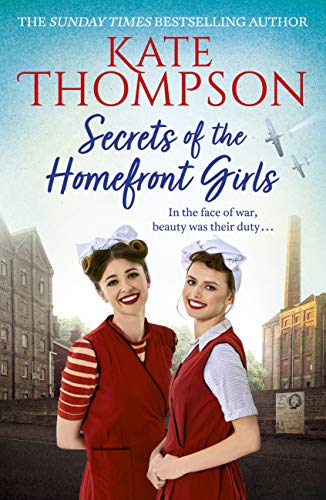 A new series from bestselling author Kate Thompson.'Kate Thompson's wartime novels always strike a chord and Secrets of the Homefront Girls is no exception. You can almost smell the Yardley violets drifting over the factory as the girls live lives complicated by the trials and tribulations of war' My Weekly'Kate Thompson's put the lives of women working in the Yardley factory during the Blitz at the heart of her latest novel' Woman's HourStratford, 1939.Britain may be at war, but on the home front keeping up morale and keeping up appearances go hand in hand. For the young women working on the lipstick production line at Yardley's cosmetics factory, it's business as usual.Headstrong Renee Gunn is the queen of the lipstick belt - although her cheeky attitude means she's often in trouble. When Esther, an Austrian refugee, arrives at Yardley's, it's Renee who takes her under her wing and teaches her to be a true cockney.But outside of the factory, things are more complicated. Lily, Renee's older sister, has suddenly returned home after six years away, and is hiding a dark secret. Meanwhile Esther is finding life in England more difficult than expected, and it's not long before Renee finds herself in trouble, with nowhere to turn.In the face of the Blitz, the Yardley girls are bound together by friendship and loyalty - but could the secrets they are hiding be the biggest danger of all?'Kate Thompson is a skillful and humane storyteller who lights up the sooty face of the old East End with tales full of drama and human interest.' Annie Murray